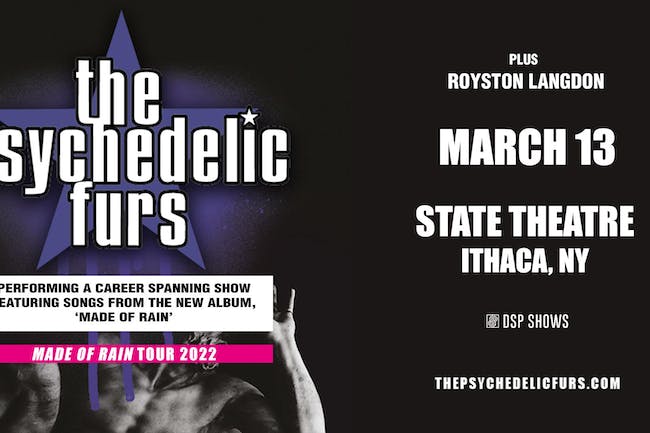 iCal
Google
The Psychedelic Furs: ‘Made of Rain Tour 2022’

From its exhilarating opening bars, Made Of Rain - the first Psychedelic Furs album in 29 years - sounds like them and them alone. It’s a joy to hear again, fresher than ever, that unique mesh of sounds and layers, that fusion of smooth and stark, of restraint and abandon, of melancholy and rage, of optimism and nihilism, of tough and tender. Their ageless charisma flows anew. “It’s got that depth and weight of sound”, says Richard Butler as 2020 begins. Talking about the first track, The Boy That Invented Rock & Roll, he suggests, “It’s saying rock & roll was born out of feelings like these…”the ticking veins, this godless dark , the druggy days, the pointless pain…a bag of tears where love is gone”. In a way it’s about Elvis Presley and all those people, but not just any individuals – it’s the feelings which rock & roll, for me, comes from. And of course rock & roll has a great deal of sexuality involved too. The boy is…an idea: I’m not claiming that position for myself!”

The Psychedelic Furs may not have invented rock & roll per se, but their influence since arriving on the post-punk scorched-earth landscape four decades ago has reverberated and resonated among all those who cherish the sweet-and-sour spot where rawness and romanticism meet. “I’m aware of the fact that people cite us an influence”, says Richard, “though I don’t often recognise it in their music. It’s gratifying of course, as it is that there’s still an interested and enthusiastic audience for us. That’s an honour.”

As the Furs ’witty, poetic, pugnacious onslaughts seared out of punk then sashayed beyond New Wave, launching a fleet of durable hits, they evolved electrically and elegiacally until taking a studio hiatus from 1991. Yet since reconvening as an essential live act at the turn of the century, they’ve found the applause growing louder and louder. People realised how much they loved those songs from the 1980 debut The Psychedelic Furs, 1981’s Talk Talk Talk, 1982’s Forever Now, 1984’s Mirror Moves, 1987’s Midnight To Midnight, 1989’s Book Of Days and 1991’s World Outside, from early forays like Sister Europe and India through Pretty In Pink and President Gas to radio staples Love My Way, Heaven, The Ghost In You and Heartbreak Beat. And while The Furs lay latent (studio-wise), Butler remained busy, releasing two Love Spit Love albums and a solo album, as well as painting exhibitions. Yet the urge, the itch, came back and the skies opened to deliver Made Of Rain.

Given that the band were active touring, why hasn’t there been a new album for so long?

“It’s a fine balance”, muses Richard. “When you’ve been around for a while, people want to hear certain songs at your shows. It was even like that back when we toured with the second album…we’d do new ones like Pretty In Pink – y’know, pretty good songs – and people just stood there not getting it, wanting to hear the “old” stuff! So at first that was fine, as we didn’t do that much touring. It was exciting to play those songs again after taking a break. But as we did more and more, eventually we started to feel like a jukebox. And you want to be CREATIVE. And that won out. It got to this point where we felt we HAD to make a

new record, we needed new songs to get into. And now I hear this album and I’m very pleased we did…”

The six-piece line-up has gelled into a groove-some, guileful beast. With, of course, fellow founder Tim Butler (Richard’s brother) on bass, it features Mars Williams on saxophone, Rich Good on guitar, Paul Garisto on drums and Amanda Kramer on keyboards. “Oh it’s a good thing”, nods Richard. “We’re all friends, we’re all family.

The album, released May 1st on Cooking Vinyl, is produced by Richard Fortus (with The Psychedelic Furs), a Love Spit Love alumnus who’s also played guitar with Guns ‘N Roses and Thin Lizzy. “His band had opened for The Furs once and I liked his playing and his personality. So when I wanted someone to write with after we first split up, I brought him to New York. His input on the songwriting (for Love Spit Love) was huge. So that’s where I knew him from. We kind of co-produced on this, in terms of ideas, but he was inspirational, led the way”. Mixing duties were handled by Tim Palmer (David Bowie, U2, Robert Plant).

And while making the abundance of riches which form The Furs ’sound shine at its brightest might be considered a challenge, “They’re all great players. Everyone found a place for themselves, quite naturally”.

What crystallised the title Made Of Rain?“There’s…a lot of sorrow and darkness in it. A while ago I read the book-length poem The Man Made Of Rain by Brendan Kennelly. A person who was dying was visited by “a man made of rain” and I liked that idea; it fit. For some reason, when writing, I always seem to tend towards the melancholic. Or sometimes, also, anger. There have been very few“celebratory” songs…I suppose perhaps Love My Way, possibly Heaven. But for the most part it’s safe to say the songs are tinged with melancholy.”

And is it different writing in the modern world, much-changed since the last Furs songs?

“For me, not really, because most of my songs address an inner monologue. They’re not “news-related”. I’ve never sat down and said, “I want to write a song about THIS subject.” The music comes first, then I’ll come up with a melody, then that puts me in a certain frame of mind. Then the words come from that place, that frame of mind. It’s not to do with “world events”. It’s interior.”

In the way the impressionistic phrases spark off each other like juxtaposed images, there’s a reminder that Butler’s an exhibited artist. “It’s painting a verbal picture of the feeling the music brings out in me. But one of my favourite lines here comes on Wrong Train. “A wife that hates me…so does her boyfriend”. It makes me laugh! Sure there’s a certain sorrow to it as well, but…it’s dark comedy”.

Richard hears echoes of the first two albums in the existential pop song Don’t Believe, the first single (released January 31st). “It’s very Psychedelic Furs-sounding”. You’ll Be Mineboasts a “very John Cale-sounding” Velvetsy violin. And as the album later slows the tempo, arching the atmosphere across tracks like This’ll Never Be Like Love and Ash Wednesday, he points out that the band have always teased out songs like that – he cites Sister Europe and Imitation Of Christ as examples – as part of the mix. Discussing the spooky Come All Ye Faithful, he acknowledges an unexpected influence in David Essex’s Seventies hit Lamplight. “I’d always loved the creepy feeling of that song…hence the church bells…” Hide The Medicine bears a subtle, sinister rumble of threat, of thunder approaching in the distance.

Talking of Pop Art (weren’t we?), Andy Warhol’s book From A To B And Back Again gets name-checked in Tiny Hands. Delightfully, Richard has not one but two signed copies. One in which Warhol, at young art student and Velvets fan Richard’s request, drew a banana at a London book signing. And another from years later when Warhol invited the band to The Factory in New York. “He was a wonderful host. Very sweet. After that he came down to a couple of shows…”

The band’s peerless permutations of art, aggression and ambience drive the dynamics on Made Of Rain, and it’s always been this originality which has set them apart, a cut above. Back when they started, Punk Rock “helped us realise, all of a sudden, that you didn’t need a lot of fancy equipment: attitude was important. But at the same time we were inspired by Roxy Music, and I still loved Bob Dylan and The Velvet Underground. It wasn’t JUST punk.” Indeed the band, after initial outings as first RKO then The Europeans, chose their name as wilful misfits. “We’d look at the list of gigs and for the most part names were…violent. The Sex Pistols. The Stranglers. So I wanted something that made people go, “What the f*ck are they doing?” And we knew “psychedelic” would do that…”

As they moved to America, where Richard now resides in upstate New York, some were again disorientated, and the band’s later albums were perhaps perceived from a different angle. “Some might have thought we were “traitors””, laughs the singer. “But after the Forever Now tour, I had a girlfriend at the time who lived in New York, and I said to Tim, “Fancy moving over here?” And we did. I guess that changed English people’s perceptions of us. Maybe it’s reflected on Mirror Moves. We’d been lucky on the first two albums with Steve Lillywhite producing – he absolutely didn’t want to dampen down our live sound. He wanted it to sound like one of our gigs, which was everybody fighting for a place to be heard on top of a racket! Then later, as we wanted a change, Todd Rundgren was a good choice for Forever Now. I wanted to do something different, and I’d loved the chugging cellos in Stravinsky’s The Rite Of Spring so we brought that into President Gas. And so then we were in America…”

Yet in another time and any place, the beautiful chaos abides. In recent years the band have played the Royal Festival Hall for the Meltdown Festival at Robert Smith of The Cure’s request and everyone from The Killers to REM to Foo Fighters has sung their praises. Many moons after Pretty In Pink (sort of) inspired that John Hughes movie, Love My Way has featured in Oscar-winning film Call Me By Your Name and The Ghost In You in sci-fi smash

Stranger Things. Psychedelic Furs are sounding stronger than ever. As anyone who’s seen the band lately knows, Butler remains one of the most watchable frontmen in the game: pacing, crouching, theatrical, enigmatic but engaged. Tours are planned, and prestigious live shows this year will include London’s Royal Albert Hall on May 14th. Party time is here again.

“A lot of people tend to look back on their youth as being the most fantastic time, but it really wasn’t: I think my life is just as good now, if not better. There’s a great deal of pleasure to be had in knowing yourself rather than always second-guessing. Knowing your strengths”.

As the closing track on Made Of Rain sighs, “these are the days that we will all remember”.Does this feel like a special time again?“Oh every minute you’re alive, they’re all great days.”What a glorious feeling. Let it rain.