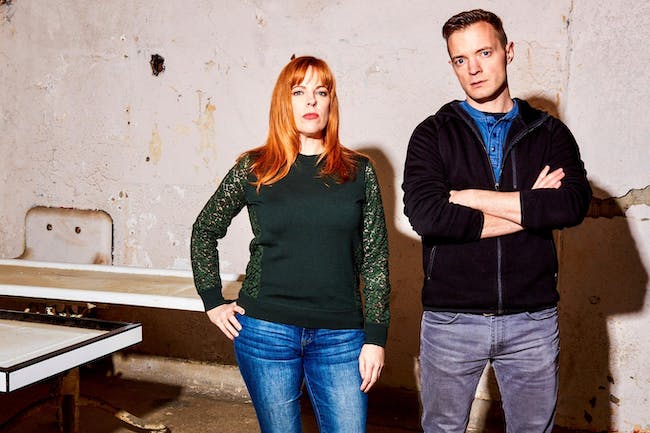 KINDRED SPIRITS: Behind The Hauntings with Amy Bruni & Adam Berry

iCal
Google
"Behind the Hauntings: An Intimate Evening with Amy Bruni and Adam Berry, Hosts of Travel Channel's Kindred Spirits”

Adam Berry, is the co-star and Executive Producer of the hit television series Kindred Spirits now on Travel Channel. Adam’s love and passion for the paranormal ignited from an extremely haunting experience he had in Gettysburg PA. After many years of studying, research and founding his own paranormal research team with his husband Ben Berry he was asked to join the SyFy Channel original series Ghost Hunters Academy. This competition reality show tested the strengths of investigators from around the country and Adam proved to be the best of the best by winning and was awarded a spot on the TAPS team and the original series Ghost Hunters. Adam likes to say he was awarded Amy Bruni as his prize because the two paired up and have since became a paranormal powerhouse. With similar beliefs and styles Adam and Amy possess the capabilities to connect with those in the afterlife with uncanny accuracy. Focusing on helping families and spirits alike, they have traveled the country changing the way the world thinks about ghosts and what happens after we shuffle off this mortal coil.

When Adam isn’t looking for ghosts, he is the Executive Director of Peregrine Theatre Ensemble, a non-profit theater company based in Provincetown MA. This educational summer theater program produces some of the most spectacular musicals and plays on the Cape while also nurturing young actors in a professional working environment.

Adam also sits on the board of directors for “Tim’s Fund”, a non-profit scholarship program created to support social activists who change the world through art, music, literature, and filmmaking.

Adam loves to travel with his husband Ben and their two Chihuahua’s Maria and Cheeto.

Amy Bruni, co-star and Executive Producer of Travel Channel’s hit paranormal series "Kindred Spirits", calls upon over 20 years of investigation experience to help people reclaim their homes and lives from the mysteries of the unknown. Amy's passion for helping others comes together with her love for paranormal exploration as she joins her partner in crime, Adam Berry, and forms a paranormal powerhouse aimed at helping families in crisis find answers from the world beyond the veil.

Prior to "Kindred Spirits", Amy was a star of SYFY's popular paranormal program, "Ghost Hunters". Joining the cast in 2008, Amy traveled the country exploring the most haunted locations in America while working as the team's historical researcher to give identity to the long forgotten spirits they encountered during their travels. After seven exciting years with the show, Amy exited to focus on her growing family and start her own paranormal travel company, "Strange Escapes". Her love of travel mixed with her passion for the unknown flourished as she now invites lovers of travel and mystery to try their hand at investigating some of the country's most infamous haunts, including the Mt Washington Hotel, The Queen Mary, and The Saint Augustine Lighthouse.

Even with her return to television with "Kindred Spirits", Amy loves to stay busy and active within the paranormal community, continually finding new and exciting haunts for her travel business. She invites those looking to experience the bizarre and unknown to join her, and other celebrity guests at her Strange Escapes throughout the year.

In the rare instances that Amy finds a bit of free time from investigating or running her travel business, she enjoys scouring antique stores for spiritualist memorabilia, hitting the beach, and drinking wine. Though she stays busy, she'll never say no to a good ghost hunt- or chardonnay.