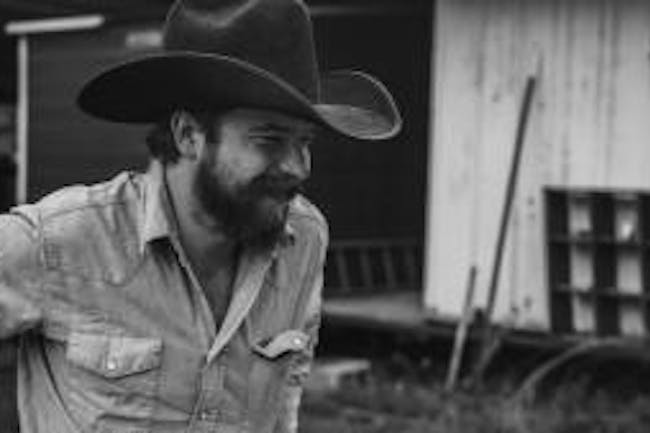 Western Canadian songwriter Colter Wall is a weathered baritone that spins narratives on the stage. He sings traditionals known to most, historic reverie, and poignant originals, raising both goosebumps and beers throughout the evening. It's a nostalgic atmosphere and a simple yet colorful experience.

On his third album, Western Swing & Waltzes and Other Punchy Songs, Wall's 10-track ode to the themes and labors of western life, picks up where his last album left off, with a reverence for his "working cowboy kin."

Recorded in the heart of Texas at Yellow Dog Studios, Wall's new album features his own band hot off a North American tour. Along the Blanco River bank, outside the small town of Wimberley, Colter and his boys recorded a collection of cowboy songs, old and new.

On the album is title track "Western Swing & Waltzes," first heard on his Austin City Limits performance. Also included among the tracks is the Stan Jones' classic "Cowpoke," a cover with increasing popularity among fans. Featured on most tracks are stronghold sidemen like Patrick Lyons, a multi-instrumentalist who textures grooves with his standard pedal steel guitar, dobro, mandolin, and a few surprises. Prominent harmonica player Jake Groves graces many songs with haunting, long trails and leads. While longtime bass player, heard on Wall's previous two albums, Jason Simpson, alongside drummer Aaron Goodrich, wrangles the band's rhythm. A handful of friends including Emily Gimble and Doug Moreland lend their talents in addition to Wall's live band sound.

Unlike his previous albums, Wall produced Western Swing & Waltzes and Other Punchy Songs on his own. His band. His choices. It was a decision that diversified and put some giddy-up in the album's sound.

About the album, Wall said "these songs are punchier than I am." With an increasing presence in the Western Lifestyle world, Wall is, however, no slouch on the ranch. As any new cattleman would, Wall adds to his herd, as he does his musical background.

The Local Honeys are from some of the oldest mountains in the world. They fish because it’s good eating, they tell stories worth telling, and they play old-time music because that’s just music. They are a Kentucky duo, names Montana and Linda Jean, and they’re here to talk about suffering.

These are voices that still call horses home and rain pretty in the hollers, because their roots in American traditional music are authentic. Influences of the old world ballad and natural awe push their music, but their style is distinct and unforgettable. The Local Honeys write music for people who need it. Theirs is the ancient spirit, most at home in the verdure and heartbreaking conceits. At the core of this music, promises renew, and without a filter, rural America survives. But make no mistake, the Local Honeys are here to talk about suffering.

For they will help you get through. It’s what they’ve always done. Their debut album, Little Girls Acting Like Men, propelled them on tours through the United States and Europe with Colter Wall. Soon, they found themselves focal points of traditional music festivals, becoming a headline draw throughout the UK almost instantly.

Since then their specific sound of Appalachian music has grown, along with a fan base of music enthusiasts and proactive culture. A tour with Tyler Childers in early 2020 was followed up by a fun, yet controversial album The Gospel. With two records at their back, The Local Honeys set a standard for the preservation of old-time, hillbilly music, and the contemporary influences that inspire their songwriting. The Local Honeys have true charisma, and on stage, there’s no doubt they are headline artists.

As buzz continues to build for The Local Honeys, despite a pandemic-deadened 2020 tour schedule that included shows at the biggest folk festivals around, they signed with songwriter haven, La Honda Records, home to country & Western heavy hitters Vincent Neil Emerson and Colter Wall. A recent summer show with the Kennedy Center for the Performing Arts highlighted continued focus and output, including new songs from the two women.

If there’s any doubt, there won’t be for long. When they sing their songs, play their banjo, their fiddle, those guitars and boxes, the rhythms in their toes, you will know The Local Honeys are from Kentucky. Their names are Montana and Linda Jean, and they’re here to talk about suffering. They are here to get you through this.

New date! @dinosaurjr's show at @stateofithaca has been rescheduled to Fri. September 9, 2022, tickets are back on sale now: https://bit.ly/3iGoHkf