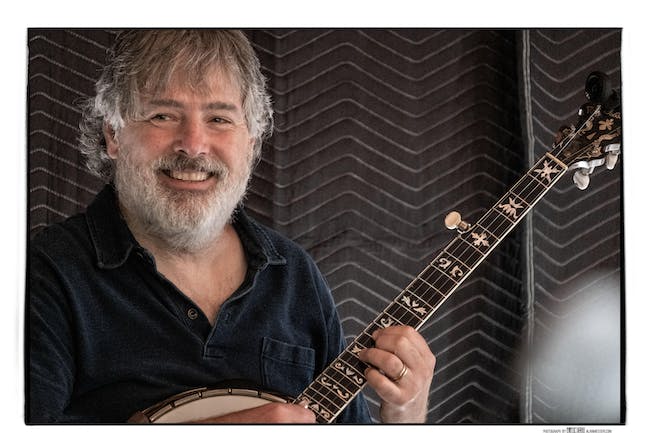 I’m so looking forward to taking this band out on tour. For folks that know bluegrass, these folks need no introduction, as they’ve been making a ton of noise in that world for some time.

I have almost always played and recorded my bluegrass projects with the folks from my own age and peer group — Sam Bush, Jerry Douglas, Stuart Duncan, David Grisman, Tony Rice, Mark O’Connor, etc. But for this new album, I wanted to open up to the fresh and powerfully evolved musicians who have come along since us, and partly because of us! This tour will feature some of these players.

I first got to know Sierra Hull when she asked me to produce her album, Weighted Mind. She is a shockingly good player, with more than enough ability to play my admittedly angular and sometimes complex form of bluegrass. So I’m thrilled to finally be able to do some live playing with her and take it to the moon!

Stuart Duncan and I go way back. I prided myself on being to him what Jerry Douglas had been to me - encouraging him to move to Nashville to play with Nashville Bluegrass Band. Somehow Stuart has managed to elevate bluegrass fiddling dramatically in earthy and unexpected ways.

My pal Bryan Sutton, a stunner of a flat picker and one of the bright lights of the bluegrass guitar continuum has been my cohort in the Telluride House Band as well as an acoustic trio that I toured with some years back with Casey Driessen. But playing on this new album he impressed me over and again with his flexibility and raw ability.

Bassist Mark Schatz and I started playing together way back in 77’, in a Boston Bluegrass band unfortunately named Tasty Licks! We moved together to Lexington, KY in 79’ to start Spectrum. In 81’ I joined New Grass Revival, and he went on to play with Tony Rice, Tim O’Brien, and Nickel Creek among many others. I’m thrilled to be reunited with my old, right-hand man, Mark!

I was stumped for a while as to what to do about the double fiddle and dobro parts on the recording, until I realized there was one guy who could do both — and a whole lot more. Justin Moses is a great mandolinist, banjoist, and a great singer to boot. He’s gonna be our wild card. He will be grabbing the fiddle to double fiddle with Stuart, switching to dobro, then jumping to banjo for a double banjo number, and mandolin for the double mando track from the album. So I’m amazed I could get all that in one very talented guy.

As you can imagine, I’m very excited to play with these guys. We’ve all been locked up for so long and we’re dying to get out there and play some music!

Just in case you aren’t familiar with Béla Fleck, there are many who say he’s the premiere banjo player in the world. Others claim that Fleck has virtually reinvented the image and the sound of the banjo through a remarkable performing and recording career that has taken him all over the musical map and on a range of solo projects and collaborations. If you are familiar with Fleck, you know that he just loves to play the banjo, and put it into unique settings.

A fifteen-time Grammy Award-winner, Fleck has the virtuosic, jazz-to-classical ingenuity of an iconic instrumentalist and composer with bluegrass roots. His collaborations range from his ground-breaking standard-setting ensemble Béla Fleck and the Flecktones to a staggeringly broad array of musical experiments. From writing concertos for full symphony orchestra, exploring the banjo’s African roots, and collaborating with Indian musical royalty Zakir Hussain and Rakesh Churasia with Edgar Meyer, to performing as a folk duo with wife Abigail Washburn, and jazz duos with Chick Corea, many tout that Béla Fleck is the world’s premier banjo player. As Jon Pareles wrote for The New York Times, “That’s a lot of territory for five strings.”

Multi-instrumentalist Stuart Duncan has built upon his bluegrass roots to become an artist that defies categorization and surpasses the limits of any specific genre. The consummate sideman, Stuart has lent his particular taste and tone to countless artists and projects. Whether trading dizzying instrumental licks with the likes of Béla Fleck and Jerry Douglas, or adding complimentary fills for vocalists Alan Jackson and Barbara Streisand, Stuart has found a professional “home” both in the studio and on tour. From Robert Plant to Panic at the Disco, Stuart’s playing and influence can be heard among many of today’s top hit-makers.

The most recent evidence of Stuart’s cross-genre expansion is “The Goat Rodeo Sessions,” his collaboration with Chris Thile, Edgar Meyer and Yo-Yo Ma. During the creative course of this recording, Stuart has opened his mind not only musically, but to a broader concept of composition as well. When not active in the studio or on tour with others, Stuart can be seen and heard with The Nashville Bluegrass Band, where he’s been a contributing member since 1985. The band has won two Grammies, multiple IBMA & SPBMA awards, and has toured globally from here at home to the Middle East and China. Together, they continue to be an outstanding representation of classic bluegrass music in America – as relevant today as when they started.

In her first 25 years alone, singer/songwriter/multi-instrumentalist Sierra Hull hit more milestones than many musicians accomplish in a lifetime. After making her Grand Ole Opry debut at the age of 10, the Tennessee-bred virtuoso mandolinist played Carnegie Hall at age 12, then landed a deal with Rounder Records just a year later. Now 28-years-old, Hull delivered her fourth full-length album for Rounder in 2020: an elegantly inventive and endlessly captivating album called 25 Trips. Revealing her profound warmth as a storyteller, the album finds Hull shedding light on the beauty and chaos and sometimes sorrow of growing up and getting older. To that end, the album’s title nods to a particularly momentous year of her life, including her marriage to fellow bluegrass musician Justin Moses and the release of her widely acclaimed album Weighted Mind — a Béla Fleck-produced effort nominated for Best Folk Album at the 2017 Grammy Awards.

Justin Moses is an award winning multi-instrumentalist celebrated as one of the most versatile musicians in all of acoustic music. A prominent Nashville session musician, he has appeared on stage or in the studio with an endless list of diverse artists such as Alison Krauss, Del McCoury, Garth Brooks, Emmylou Harris, Brad Paisley, Vince Gill, Bruce Hornsby, Béla Fleck, Peter Frampton, Rosanne Cash, Marty Stuart and Barry Gibb among many others. In 2018 and 2020 he was named Dobro Player of the Year by the International Bluegrass Music Association. Moses began his musical journey at the age of six after becoming interested in the mandolin. He soon developed a lasting passion for making music. He started to hone his skills playing in his family's band as a child. Since then, he's toured with bands such as Blue Moon Rising, The Dan Tyminski Band, Ricky Skaggs & Kentucky Thunder, Blue Highway and The Gibson Brothers. In his two-year stint with Tyminski, he realized an early dream of playing the Grand Ole Opry for the first time and recorded the 2009 IBMA Album of the Year and Grammy-nominated album, Wheels. He released his full-length album Fall Like Rain on January 22, 2021 with Mountain Fever Records.

Twice named IBMA’s Bass Player of the Year, Mark Schatz has toured and recorded with a stellar array of artists including Bela Fleck, Tony Rice, John Hartford, Tim O’Brien, Nickel Creek, Claire Lynch, and Sarah Jarosz. Mark is the Musical Director for internationally acclaimed Footworks Percussive Dance Ensemble which showcases other talents such as clawhammer banjo and Southern Appalachian clog dancing. This versatile multi-instrumentalist has two of his own solo recordings, Brand New Old Tyme Way and Steppin’ in the Boiler House on Rounder Records, which feature his own eclectic blend of original compositions on the banjo, and two bass instructional videos on Homespun. Mark recently launched his own solo show: Mark Schatz — The Solo Concert, in which he brings all of his skills to bear to tell his story through his own tunes and songs.

Bryan Sutton is the most accomplished and awarded acoustic guitarist of his generation, an innovator who bridges the bluegrass flatpicking traditions of the 20th century with the dynamic roots music scene of the 21st. His rise from buzzed-about young sideman to first-call Nashville session musician to membership in one of history’s greatest bluegrass bands has been grounded in quiet professionalism and ever-expanding musicianship. Sutton is a Grammy Award-winner and a nine-time IBMA Guitar Player of the Year. But these are only the most visible signs of Sutton’s accomplishments. He inherited and internalized a technically demanding instrumental style and has become for young musicians of today the same kind of model and hero that Tony Rice and Clarence White were for him. And supplementing his instrumental work, he’s now a band leader, record producer, mentor, educator and leader in online music instruction.